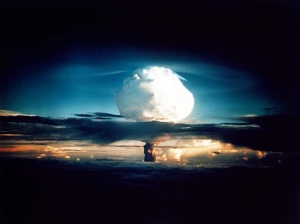 The stupidity of humanity is astonishing. Since the horror of the nuclear age was unleashed 70 years ago with the obliteration of Hiroshima and Nagasaki, America has taken the lead in producing thousands of warheads many times more powerful than the ones that were detonated over Japan in 1945.
The specter of nuclear war loomed large during the Cold War, but in the early 1990’s relations between the USSR and the West began to thaw. First the Berlin Wall was torn down. Then the mighty Soviet Union simply dissolved. There was supposed to be a new world order and a peace dividend, but instead the US has launched an endless war since the Saudi-engineered attack on 9-11-01. Now the US and NATO are back on a full war footing – not against the phantom enemy of Islamic terrorism, but against the second largest nuclear power on earth – Russia. What happened? Well, besides all the geo-political machinations, humans have failed to listen to their Creator. They have turned a deaf ear to the gospel of Christ. They have completely dismissed the fundamental truth revealed through Jesus and his apostles that Satan and his demons are the unseen rulers of this world. Those wicked spirits exert tremendous influence over those whom Jehovah does not take under his wing. So, while humans may dismiss the possibility that there could be a nuclear war, simply because to engage in such a war would be insane, they fail to consider that the wicked angels are mad. The 16th chapter of Revelation describes the war of the great day of God the Almighty at the place called Armageddon. But what precipitates that war between God and the nations? Revelation states: “They are, in fact, expressions inspired by demons and they perform signs, and they go out to the kings of the entire inhabited earth, to gather them together to the war of the great day of God the Almighty.” So, it is the demons who are luring the rulers of this world into a suicidal conflict, one which God will cut short, but which will ultimately segue into a war with God Almighty. But ask one of Jehovah’s Witnesses if the world is on the brink of world war and you will either get a blank stare or they will assure you that such a thing will never happen. Such is the power of the “deluding influence,” which Jehovah allows to operate upon them.
Inscripción
Regístrate para ser notificado cuando se publiquen nuevos artículos. Si no desees dar tu dirección de correo electrónico, puedas utilizar un servicio de correo electrónico temporal tipo YopMail o crear una dirección de Gmail reservado para el correo entrante de Baruq.
Lectura recomendada
Examinemos nuestras creencias: la existencia de Dios