Baruq & Cristo
“Your Deliverance Is Getting Near”! 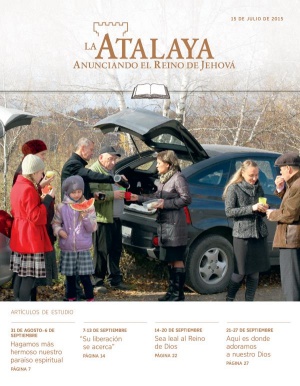 “Then it happens! Revelation 11:15 says: “And the seventh angel blew his trumpet. And loud voices occurred in heaven, saying: ‘The kingdom of the world did become the kingdom of our Lord [Jehovah] and of his Christ, and he will rule as king forever and ever.’” Yes, it is announced that God’s Kingdom by Christ was established in heaven in the year 1914.” w89 4/1 p. 19

“But there is yet more to God’s sacred secret. Since 1914 we have been living in “the Lord’s day.” (Revelation 1:10) As Revelation 10:7 states, it is the time for ‘the sacred secret of God according to the good news to be brought to a finish.’ Heavenly voices have now proclaimed: “The kingdom of the world did become the kingdom of our Lord [Jehovah] and of his Christ, and he will rule as king forever and ever.” (Revelation 11:15) Jehovah has installed the Messianic King, Jesus Christ, on his glorious throne to be coruler with Him!” w90 1/15 p. 20 par. 15 We are faced with a contradiction. The Watchtower article is using scriptures Mt 24:31, 1 Cor 15:52, 1 Th 4:16 that refer to a future event with the gathering. However the current understanding of Rev 11:15 and Rev 10:7, which is the same event as the previous scriptures places the event as having occurred in 1914. The scriptures used in the article, and the scriptures in Revelation mentioned above, are of the SAME event. The seventh trumpet in Rev 11:15 and Rev 10:7 IS the “last trumpet” spoken of at 1 Cor 15:52 and therefore could not have taken place back in 1914. This article completely invalidates the current understanding of when the birth of the kingdom takes place. Remember that the Sacred Secret was the solution to the sin that Satan, and then Adam & Eve committed. This solution was initiated at Gen 3:15, and for several millennia has been playing out leading up to the death of Jesus Christ. However, the Sacred Secret was not finished with Jesus Death, but would continue on up until the seventh or last trumpet was blown, which is the final gathering. At this point, the Sacred Secret is complete. Rev 10:7 states “. . .but in the days of the sounding of the seventh angel, when he is about to blow his trumpet, the sacred secret of God according to the good news which he declared to his own slaves the prophets is indeed brought to a finish.”” The Watchtower article says in paragraph 14 that the final trumpet “is the time when the remaining ones of the 144,000 will receive their heavenly reward.” So how does the Sacred Secret come to a finish in 1914, as shown in the above references, when the remaining chosen ones hadn’t received their heavenly reward yet, yet alone proved their worthiness to do so? In order to come to a finish all 144,000 must receive their heavenly reward. If the Sacred Secret was brought to a finish in 1914 there would have been no need for anymore people to become anointed in the first place would there? Is it any wonder that the current understanding of the trumpets being blown is so confusing? By placing so much emphasis on 1914, true understanding of bible truths is turned into a guessing game. Consider this example from a Question from Reader article (w90 4/1 p. 31):
Q: When did the seven angelic trumpet blasts of Revelation begin to sound?
“The final three trumpet blasts involve “woes.” (Revelation 8:13) They are different from the first four trumpet blasts in that they relate to specific events. The fifth trumpet blast is related to the release in 1919 of God’s people from “the abyss.” The sixth has to do with the “cavalry” and the massive international preaching campaign that began in 1922. The seventh is linked to the birth of God’s Kingdom in 1914.”
The society actually has the trumpets being blown in reverse according to this answer. The 5th is blown in 1919, the 6th in 1922, and the 7th (last trumpet) is blown in 1914. Does that make sense? The last part of the study tells the events preceding the marriage of the Lamb: the attack by Gog of God’s people. The anointed ones, who have all recently been resurrected to heaven, will fight with the Lamb and shall overcome. The resulting war of Armageddon will lead to the magnifying of Jehovah’s holy name. (Rev. 16:16) At that time, all goatlike ones “will depart into everlasting cutting-off.” The earth will finally be cleansed of all wickedness, and the great crowd will pass through the final part of the great tribulation. With all preparations completed, the climax of the book of Revelation, the marriage of the Lamb, can take place. (Rev. 21:1-4) All those surviving on the earth will bask in God’s favor and experience bounteous expressions of his love. What a marriage feast that will be! Do we not look forward to that day with eager expectation?—2 Peter 3:13. With these exciting events ahead of us, what should each of us now be doing? The apostle Peter was inspired to write: “Since all these things are to be dissolved in this way, consider what sort of people you ought to be in holy acts of conduct and deeds of godly devotion, as you await and keep close in mind the presence of the day of Jehovah . . . Therefore, beloved ones, since you are awaiting these things, do your utmost to be found finally by him spotless and unblemished and in peace.” (2 Pet. 3:11, 12, 14) Let us, then, be resolved to remain spiritually clean, supporting the King of Peace.
Inscripción
Regístrate para ser notificado cuando se publiquen nuevos artículos. Si no desees dar tu dirección de correo electrónico, puedas utilizar un servicio de correo electrónico temporal tipo YopMail o crear una dirección de Gmail reservado para el correo entrante de Baruq.
Lectura recomendada
Examinemos nuestras creencias: la existencia de Dios