"And I have other sheep, which are not of this fold; those also I must bring, and they will listen to my voice, and they will become one flock, one shepherd." —John 10:16 The words uttered at John 10:16 has greater significance for the “Great Crowd” than they realise. Knowing who the “OtherSheep” are will draw those of the “Great Crowd” closer to their mediator Jesus, and their heavenly father Jehovah God. When considering John 10:16 was Jesus foretelling a future event approximately 2000 years in advance, the appearance of two distinct groups? One group receiving a heavenly calling contrasted to those with the hope of living on earth forever? Or rather, was he referring to prophecies which were about to be fulfilled in connection with the nations who would come to Jehovah in pure worship and have their sins forgiven on the basis of the ransom that his son paid, as the resurrected Jesus.
Consider for example Jesus’ own words at Luke 24:46,47 (MSG): He said,
You can see now how it is written that the Messiah suffers, rises from the dead on the third day, and then a total life-change through the forgiveness of sins is proclaimed in his name to all nations -- starting from here, from Jerusalem!
Jesus indicates the time was fast approaching when there would be no class distinction in his flock, his disciples must have puzzled over how those words of their Lord were going to be fulfilled. And, what a rebuke that was to the unbelieving Jews, who refused to listen to him and accept him as their fine shepherd. For now the Messiah not only rises from the dead for the lost sheep of Israel but also for all the nations as proclaimed by Jesus in Luke 24:46,47. So how do we as God’s Household come to the conclusion that the “Other Sheep” equate to the “Great Crowd”? (John 10:16; Rev 7:9-10, 13-14)
The Modern Origin of Our Present Understanding

How did we come to believe that the “other sheep” of John 10:16 refers only to those who will live forever on earth? The book Isaiah’s Prophecy--Light for All Mankind II, published in 2001, said the following under the heading “A Great Crowd Runs to God’s Anointed”:
Jesus’ disciples entertain one of two hopes. First, a “little flock” numbering 144,000 has been gathered—anointed Christians of both Jewish and Gentile backgrounds who are “the Israel of God” and have the hope of ruling with Jesus in his heavenly Kingdom. (Luke 12:32; Galatians 6:16; Revelation 14:1) Second, in the last days, “a great crowd” of “other sheep” have manifested themselves. These have the hope of living forever on a paradise earth. Before the outbreak of the great tribulation, this multitude—whose number is not foreordained—serve alongside the little flock, and both groups form “one flock” under “one shepherd.”—Revelation 7:9, 10; John 10:16. (ip-2 chap. 16 pp. 241-242 A Message of Hope for Downhearted Captives)
We should note here that until 1932 all baptized Jehovah’s witnesses were expected to partake of the Memorial emblems. (The name was adopted in 1931) In 1932 it was explained that there was a class of persons who were not considered Jehovah’s witnesses but had the “privilege” to associate with them and they had the hope of enjoying everlasting life on earth. They were referred to as the Jonadabs, who, it was believed, were prefigured by King Jehu’s associate Jehonadab (Jonadab). —see The Watchtower, August 15, 1934, page 249; also Proclaimers book, page 83. Starting with the April 1, 1935 issues of The Watchtower there was this announcement:
“Again The Watchtower reminds its readers that a convention of Jehovah’s witnesses and Jonadabs will be held at Washington, D.C., beginning May 30 and ending June 3, 1935.” The Proclaimers book states that “the Jonadabs eagerly awaited the convention.”
At this “historic” convention Judge Rutherford explained that the “great multitude,” foretold in Revelation 7:9-17, was made up of “the modern-day Jonadabs and that these Jonadabs had to show the same degree of faithfulness to Jehovah as the anointed.” (Proclaimers book, page 84) 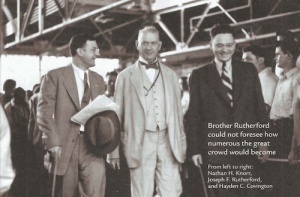 The “one hope” we all share is that “Christ died for us [and we] have been declared righteous now by his blood ... saved through him from wrath” and have become “reconciled to God through the death of his Son, ... and shall be saved by his life.” (Romans 5:8-10) As Paul writes: “For I am not ashamed of the good news; it is, in fact, God’s power for salvation to everyone having faith, to the Jew first and also to the Greek.” (Romans 1:16) The one hope, the one good news we preach, is as Jesus said at John 3:16, that “God loved the world so much that he gave his only-begotten Son, in order that everyone exercising faith in him might not be destroyed but have everlasting life.” How Jehovah will go about blessing “everyone exercising faith in him,” and how all creation “will be set free from enslavement to corruption,” is just a detail, not a separate hope. (Romans 8:19-22)

Part of that detail is that Jehovah has chosen a limited number, a little flock, “joint heirs with Christ,” to rule with his Son in his kingdom, the “administration” by means of which he will “gather all things together again in the Christ, the things in the heavens and the things on the earth.” (Luke 12:32; Romans 8:17; Ephesians 1:10) He started the choosing with the twelve apostles, who were Jews, and continued to add to them, so that at Pentecost there were 120 who received the outpouring of the holy spirit. Three and a half years later the first one of “the other sheep,” Cornelius, was added to that number, and Jehovah no longer made a distinction between the Jews and people of the nations. They had become one flock, as Jesus had promised. That God would turn his attention to the nations should not have been a surprise to the Jews, for God’s promise to Abraham included blessings for “all nations.” (Genesis 22:18) The identity of the “Other Sheep” is critical in understanding their relationship with Jesus and Jehovah, as they recognize that Jesus is their mediator, and they are declared righteous on account of their faith in the ransom sacrifice. These ones are also included in the New Covenant, and are not merely observers. They are reconciled to Jehovah God as his sons and daughters. (Rom. 5:6-11; Mal. 3:17,18; 2 Cor. 6:18; Gal. 3:26) Although some of the “other sheep” have been chosen by God to rule with his Son in his heavenly kingdom, the vast majority will share in transforming this earth into the paradise God meant it to be, along with God’s original sheep, the Jews. Among them will be the faithful men and women of old that Paul partially lists in Hebrews chapter 11.
He said, “You can see now how it is written that the Messiah suffers, rises from the dead on the third day, and then a total life-change through the forgiveness of sins is proclaimed in his name to all nations--starting from here, from Jerusalem!” ―Luke 24:46,47 (MSG)
Inscrição
Inscreve-te para ser notificado quando novos artigos são publicados. Se não quiser dar o teu endereço de e-mail, podes usar um serviço de e-mail temporário tipo YopMail ou criar um endereço do Gmail reservado para receber os e-mails do Baruq.
Posts em destaque
Vamos examinar nossas crenças: a existência de Deus